A Caution to Travelers and Visitors along the San Pedro

Visitors who want to walk along this river floodplain -- which in many years is usually a dry bed at this location --should be aware of the weather conditions concerning rainfall for the day prior to the time they choose to do so. For example, on the morning of July 27, 2006, at 7:30 AM we walked down to the banks of the San Pedro River Wash near the Teran Wash confluence, to see the situation shown below left -- the Wash had run quite high recently, and the ground was very muddy, but there was no running water. The pool at middle right in the left-hand photo was standing water, in which two children rushed out to play, getting thoroughly covered with very sticky mud. However, we knew it had rained during the night, including around our location, so we had consulted the Saguaro Juniper website Weather & Climate page, going to Current Weather Conditions, then scrolling down to the link which says "San Pedro River Current Flow near Redington, Benson, Charleston, or Palominas" and looked at the map showing current river flow at all of the sites upstream from us. We could see that a substantial flood pulse had begun at Palominas about 3 AM, and at Charleston a very substantial pulse rising up at about 2 AM. Benson showed nothing at 7 AM, but still we looked upstream a bit anxiously as we stood at the river bank while the children played in the mud for a few minutes. When we later returned to a point near the same location at about 11:30 AM, we could hear the sound of the River from a considerable distance away, and when we reached the lower bank took the photograph below right at 11:47 AM. (Click on each image for enlarged views.) 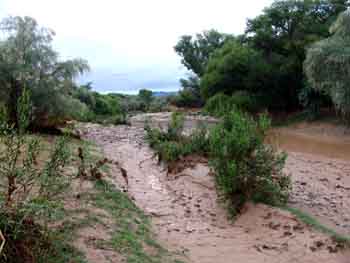 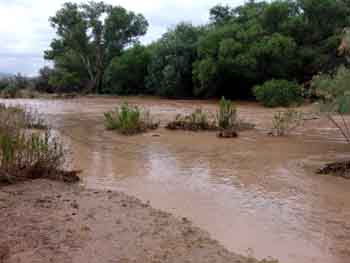 The picture above right was taken near the Tamarisk Tree which is visible on the left in the image above left. While this was only a moderate flow of the River, it was running very fast in the main channel, with numerous mesquite logs and even tree-trunks being carried downstream, the rushing water probably about 10 feet deep at the central part. Note the dark material flowing in the more slow-running side-stream near the viewer at right -- this is transported organic duff, also coming from mesquite bosques being downcut along the banks upstream. When really strong floods hit this location, the water may reach some 20 feet in depth.

It's worth emphasizing the special danger of this river during the summer Monsoons, since anyone caught standing in the wash-bottom by a flash-flood of any size would probably be killed. See below an example of a very large animal, photographed at this same location after a similar flood occurred earlier in the month: (Click on the image to enlarge it.) 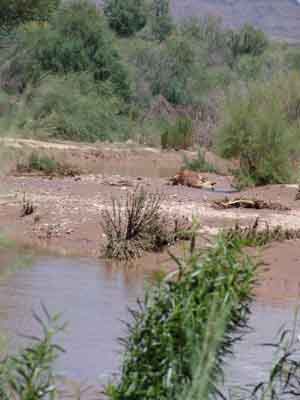