From the location at the roadside shown at the close of the Death in HSC Side-page, the view of Lower Hot Springs Canyon Wash shows its wide dimensions where it runs to its confluence with the San Pedro River (the light-colored horizontal strip at the center of the photo), below: 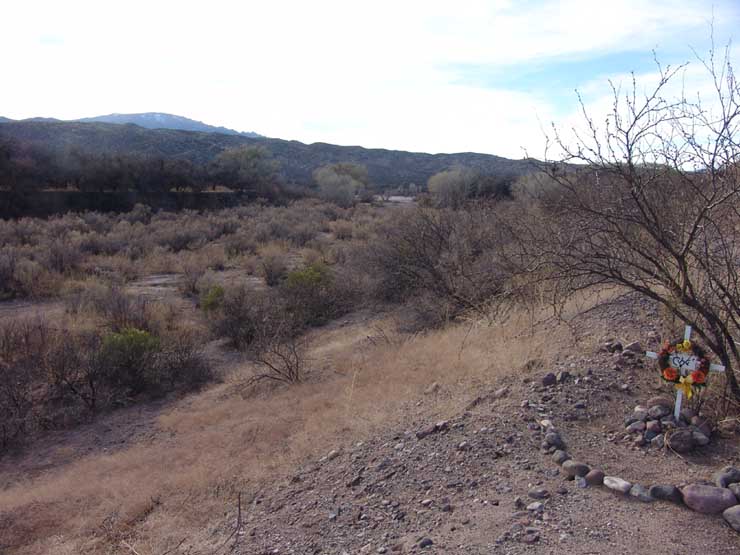 The most recent of the really large floods that have produced this very broad floodplain date from 1983 and 1991. Aerial photographs show where the stream carved out a massive "U"-shaped cut during these floods:

In this aerial photograph above (taken in 1996, thanks to Terraserver), the Cascabel Road is shown as a series of white dots across the upper part of the frame, running east-west (right-left). The black arrows show the flow pattern that produced this large horseshoe of erosion, the latest of which (as have many before) took the form of a water-mud-rock-and-tree-hauling juggernaut that threatened the substantial residence shown as a whitish rectangle in the center of the photo. (The previous residents have since moved.)

While we have yet to see photographs of the 1983 flood, we have recently obtained a copy of a photo dated to a considerably lesser flood at the road-wash confluence said to have occurred in 1984, shown below. The view is toward the southeast (What is now Elna Otter's house is in the clump of trees at right-center horizon. Max Taylor, a long-time ranch owner in Cascabel now deceased, stands at near left.) 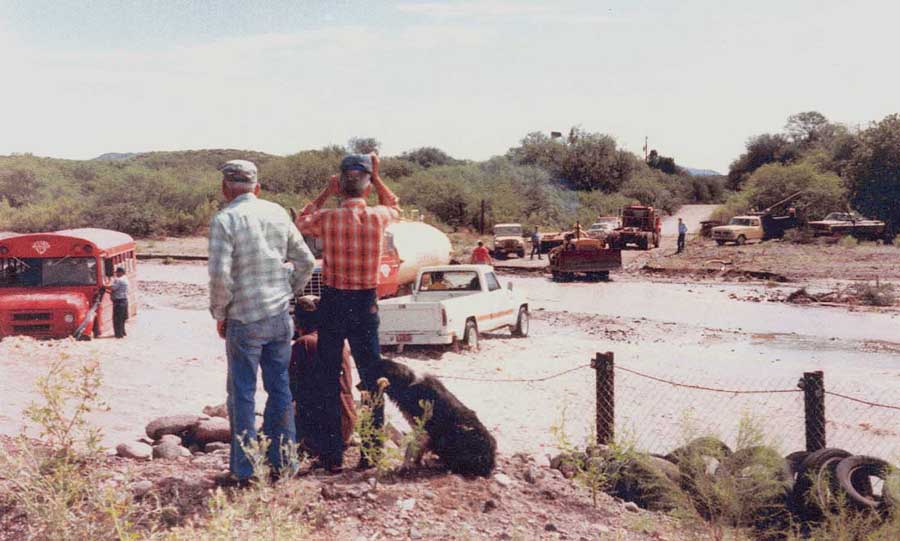 Note the red Pipeline worker transportation bus caught in the flood at the left with its front end angled downstream, and the apparent depth of the waters along the near bank. Note also that the flood had previously been much larger, the edge of the flow extending out beyond the location of the semitrailer truck parked at the far side of the road. The bank stabilization with tires and chain link shown at lower right was part of a project done by local volunteers and the County after the 1983 floods rearranged the wash. It is almost invisible today, because the Hot Springs Canyon Wash has aggraded some feet since that time at the location this crossing. Compare the tire/chain-link position shown above in the photo taken looking toward the northwest in the Death in Hot Springs Canyon Side-page.) (Thanks to Barbara Clark for clarifying the implications of this image.) This floodplain is highly dynamic, degrading and aggrading in alternating cycles.

This scene occurred long before the roadway here was given a concrete flooring, but the point is that Hot Springs Canyon produces floods of widely-ranging power, and the ones of 1984 and of August 07, 2006 were of very modest size historically speaking. Comparison with the photograph above of the same spot taken in January 2007 suggests that the river may well aggrade the floodplain further, hence burying the concrete strip, and (equally probable in the future) degrade it -- hence undermining the strip.

Thanks to Lynn Smith-Lovin's flight reporting in our area, we have this aerial view of the San Pedro River near its triple confluence with Hot Springs Canyon and Paige Wash, taken on August 25, 2006 following the moderate flood episodes of late July and early August: 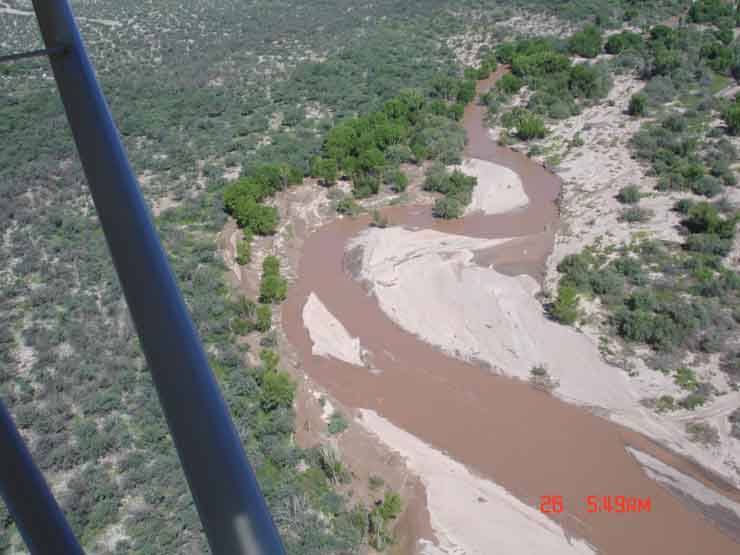 The image above looks downstream toward the northwest from a point just below the triple confluence of Hot Springs, Paige, and Roble Canyons. By that time the river flow had receded well below its recent maximum, the extent of which nonetheless remains evident. Click on the image for a close-up, which shows more clearly how the stronger flood previously struck hard against the left bank of the Wash (far left of the close-up), then rebounded across to the right, overflowing the right bank and spreading out beyond the normal banks on its run downstream (far right of the close-up). You can see that the ground is still damp on both sides of the current flow.

Note also in the image above the narrow belt of the Cottonwood/Willow Gallery Forest, with mesquite trees the dominant plant in the extensive bosque flanking it here. This is a good aerial view of characteristic juxtapositions of these two rather rare types of forest.

Below: the San Pedro running in modest flood through gallery forest near the Hot Springs Canyon confluence at Mile 26. This photo was taken just downstream from there, looking upstream in August of 1998. 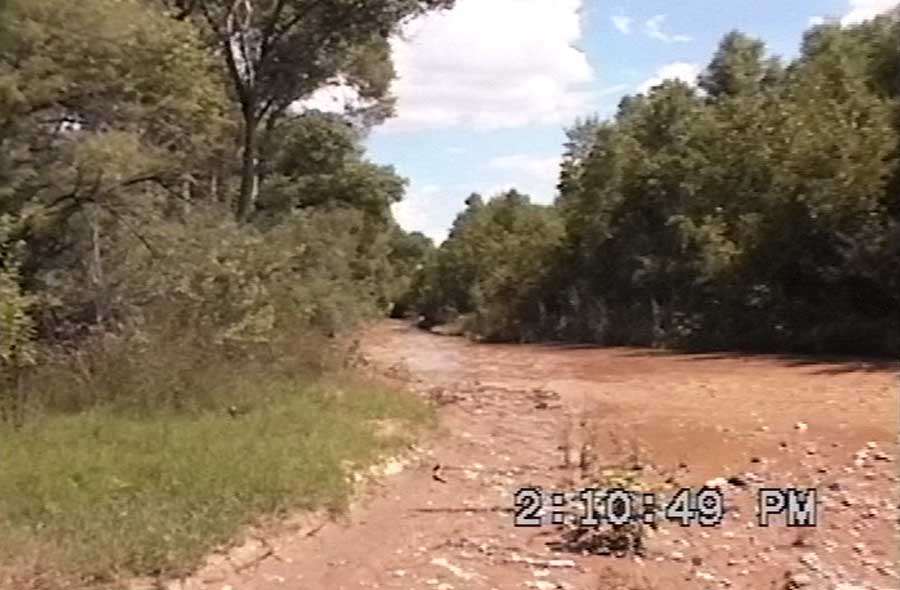 In "normal" times -- like the moment this image captures during the intense winter-rain drought of January 2006 -- the San Pedro River in the vicinity of in this location is only one of dead leaves: 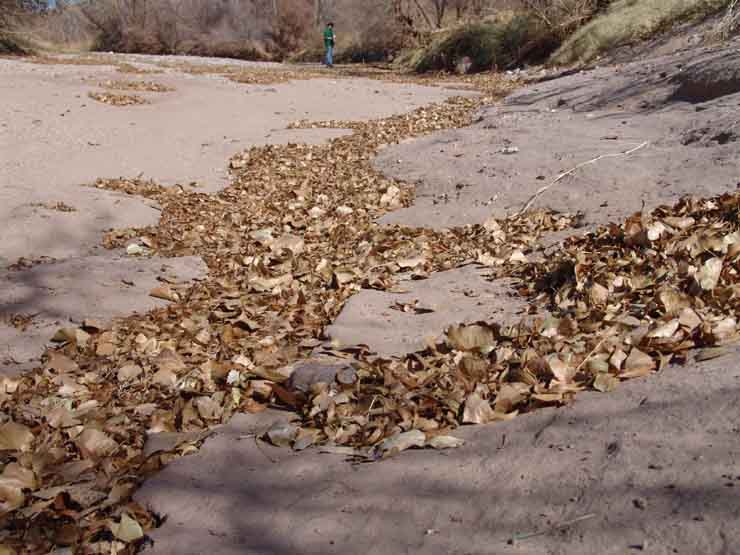 While the man playing with his toddler child in the distance was in no danger of drowning and/or dismemberment when this photograph was taken, other occasions might not prove so safe.