Above: Paige Canyon makes confluence with the San Pedro River. The river runs from left to right across the lower-middle portion of the page.

The map below shows the full length of this corridor, running from the Wildernesses of Saguaro National Monument and the Rincon Mountains on the lower left to Cascabel on the upper right, where it meets the San Pedro River. This is a long canyon with numerous side creeks, draining both the eastern side of the Rincon Mountain Wilderness and the western ridges of the Little Rincon Mountains. Click on the map for a larger view. 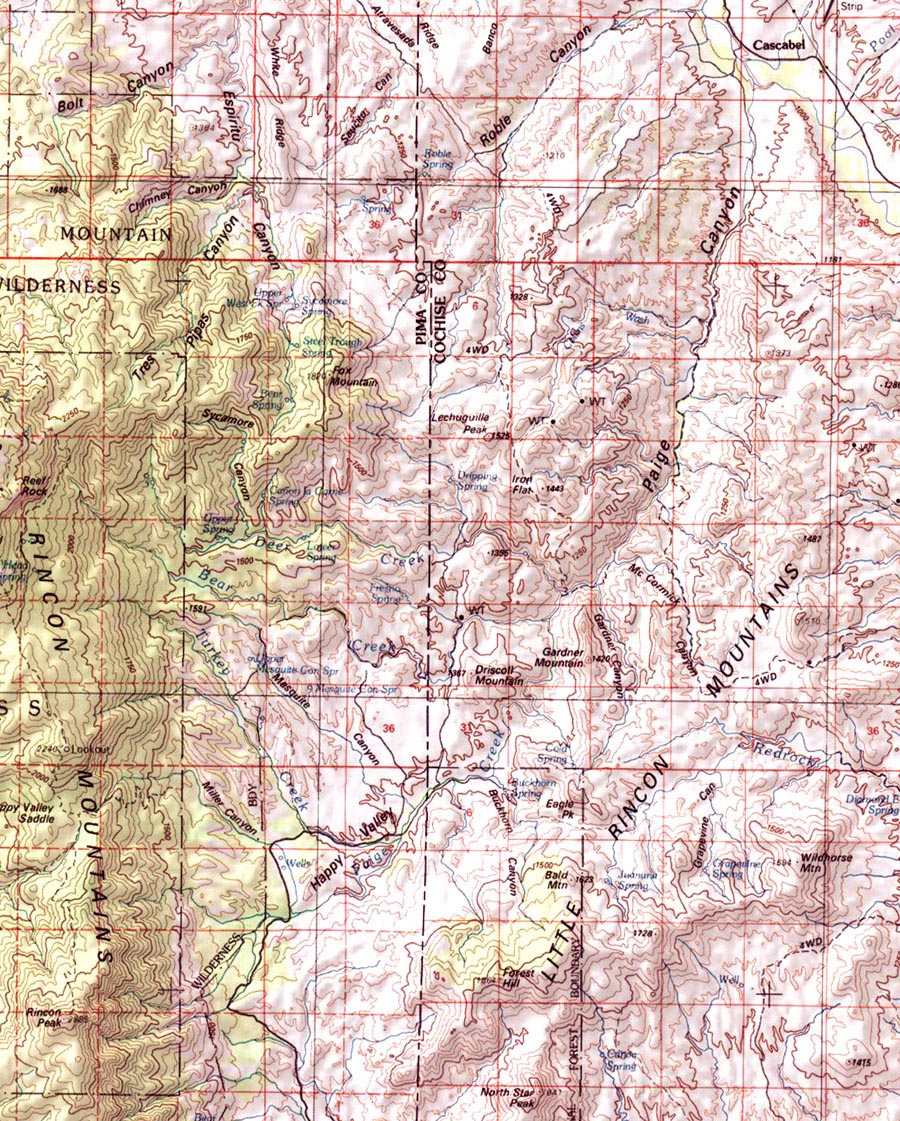 Approach from the South: Happy Valley

Below, a view from the hills above Mescal town looking north toward the valley, which lies beyond the grayish hills in shadow at low left-center marking the saddle between Rincon Mountains (far left) and Little Rincon Mountains (far right). In this image from August 8, 2008, the valley is sunlit beyond the saddle. The road from Mescal leading into the valley enters it near the lowest point on the saddle, rising roughly parallel to Ash Creek, which drains the saddle southeastward into the San Pedro River at Tres Alamos.

Below, looking toward the saddle near the summit of the Mesal Road, which stands at 4,276 feet elevation. The vegetation here is Open Oak Woodland, with scattered Evergreen (Mexican Blue) Oak, beargrass and other Nolinas. Mica Mountain towers northwest of the saddle in this image taken on March 20, 2009: 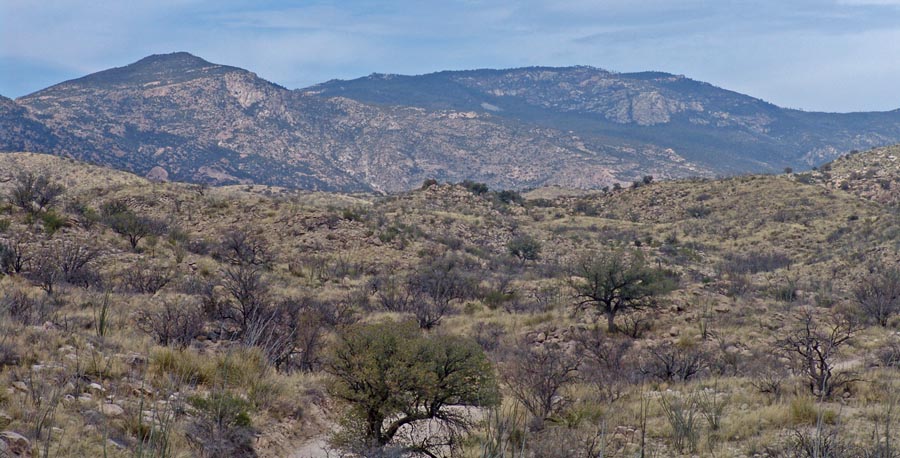 Below, a closer map view of Happy Valley. It abuts on the eastern side of the U.S. National Park Service's Saguaro National Park and a strip of the USDA Forest Service's Rincon Mountain Wilderness. (Click on the map for a larger view.)

Below, the road shown entering the valley from the bottom portion of the map drops down from the saddle, providing occasional glimpses through the Oak Woodland of the valley below, bounded to the north and east by the Little Rincons, with the Galiuro Mountains, bathed in hazy sunlight on this February day in 2002, rising far beyond them toward the northeast. (A portion of the Pinaleno Mountains is also fainty visible at far right behind the Galiuros.) 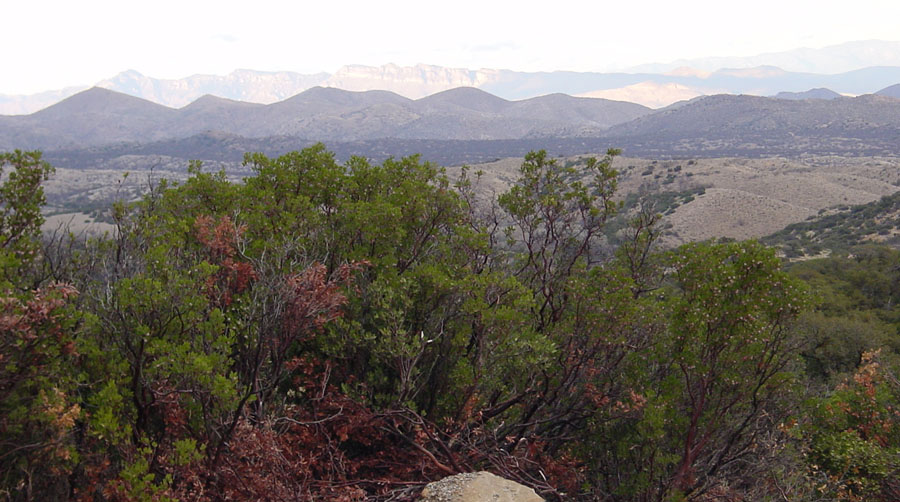 Further down, the rolling hills of this valley spread out toward the mountains bounding them toward the north in this view from March 20, 2009: 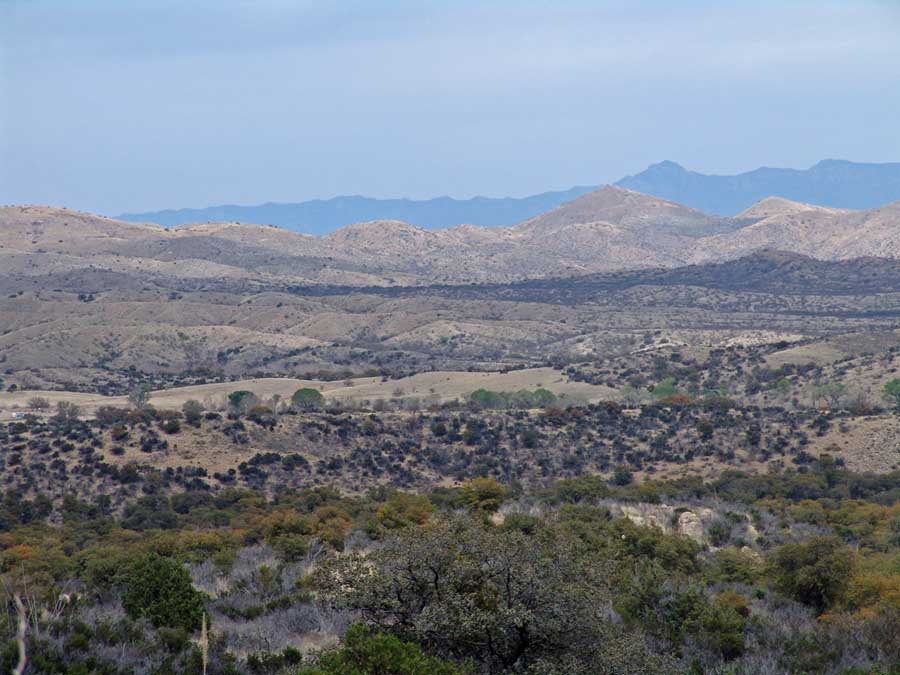 Below, looking southward across the western edge of Happy Valley from a point above the valley floor near the trailhead leading to Miller Canyon, one sees oak woodlands rising from flat measows toward the Pine-Oak Forest flanking the eastern slopes of Rincon Peak:

Below, from the same location now turning toward the southwest, the grassland and open parkland of the valley floor comes into view, with the peaks of the southern edge of the Little Rincons toward far upper left:

Below, viewing this part of the Little Rincons from the valley floor, where the upper reaches of Paige Creek begin the stream's journey northward down the corridor toward Cascabel:

Happy Valley here is a beautiful grassland with some stands of large oaks and sycamores. Sycamores are also scattered through the streambed of Miller Canyon. 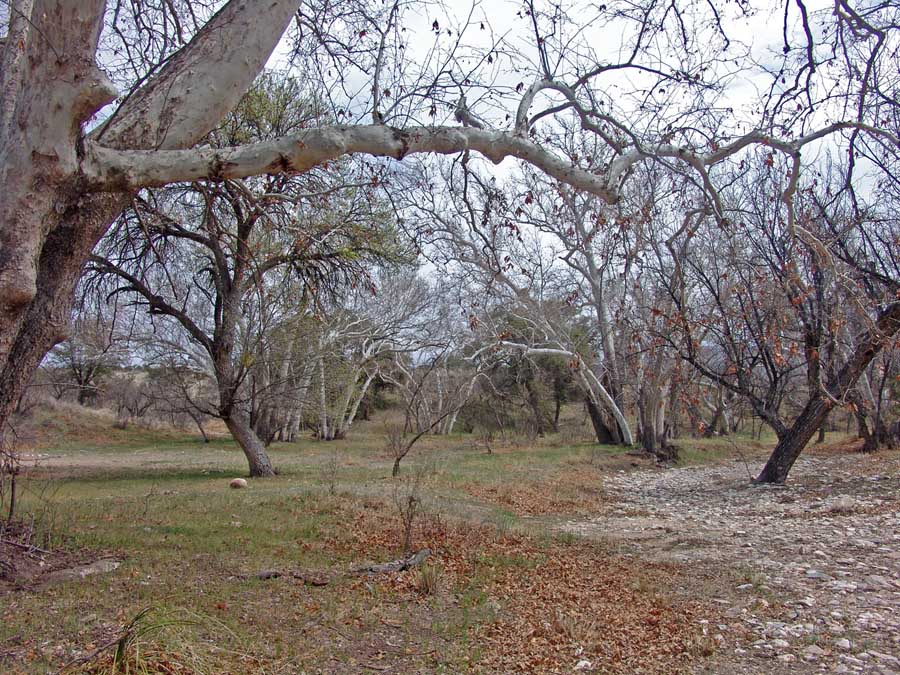 Happy Valley is important wildlife habitat, but it is also highly vulnerable to development. Dirt road and remoteness protect it somewhat for now, though on our visit of March 20, 2008 we saw a squirrel that had been shot dead while standing on a stump beside a lower reach of the Mescal road and a gray fox road-killed along the valley floor road. (Someone had driven at inappropriately high speed there.) With further development Happy Valley, given its considerable amount of private land, would become attractive to bedroom commuters. Ash Creek Road would be paved, and the suburbanizing consequences would inevitably follow as this impressive wildlife corridor would become blocked for terrestrial animals.

Below: a view of Rincon Peak (obscured in clouds) from Happy Valley 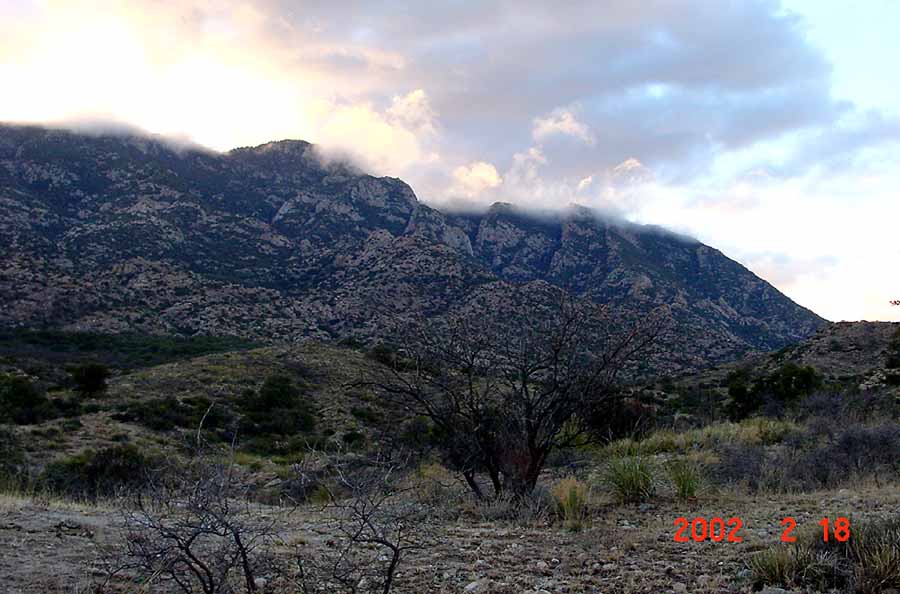 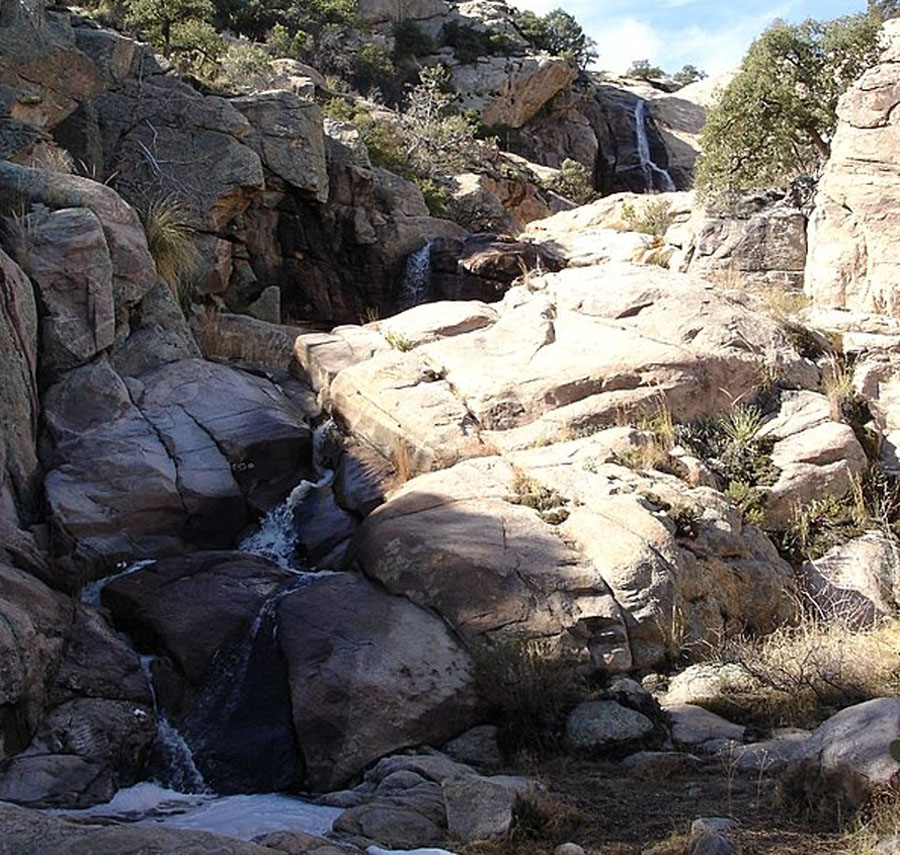 Below, the Paige Canyon - Hot Springs Canyon confluence with the San Pedro River in a map closeup. (Click on the map for a larger view.) 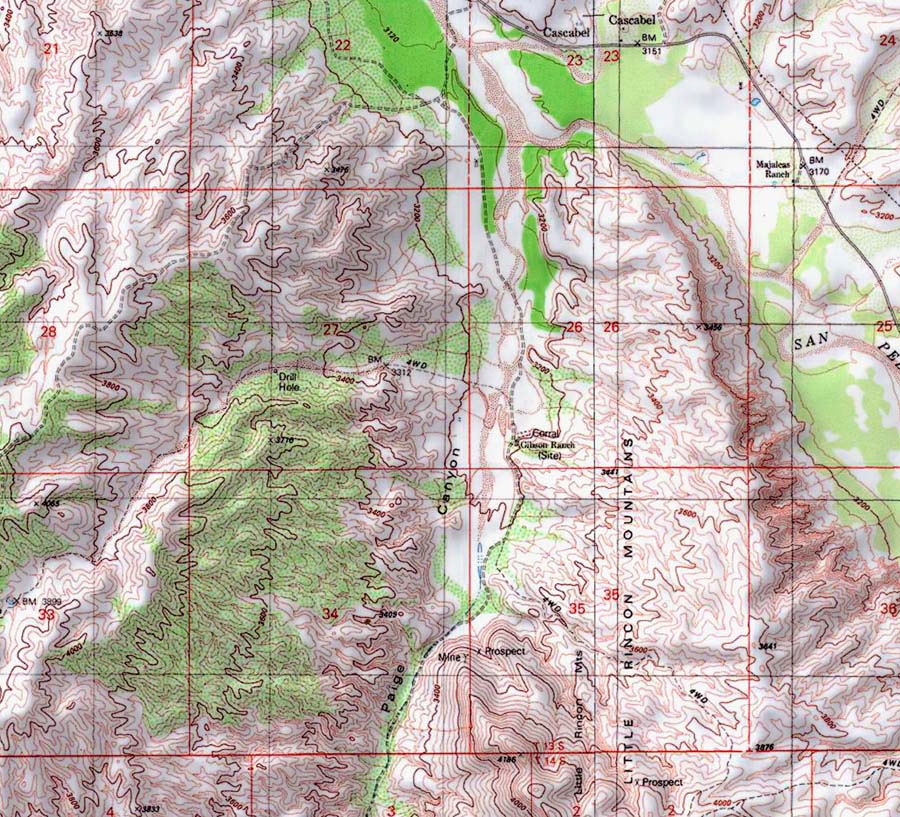 The mountain shown at right-center at the bottom of the map corresponds to the one in the photo below, taken from the north at Cascabel Community Center on May 20, 2008. This is Paige Peak, its massive body looking like a giant prone multilegged monster whose head is bowed low to drink out of Paige Creek (whose lower flanks run across the photo from middle right to lower mid-photo). The San Pedro River channel runs across the photo from lower left to right.